The 2017 BVI Dinghy Champions were crowned this weekend with 53 boats racing across four fleets.  Hosted at Nanny Cay, visitors were welcomed from Antigua, St Croix, St Thomas and Puerto Rico and treated to two days of spectacular BVI sailing.

29 boats in the Championship fleet sailed twelve races out in the Sir Francis Drake Channel and it was Rayne Duff (IVB911) who took the overall win. Not once did Duff finish a race outside the top four and he finished the regatta with seventeen points, a whopping fourteen points ahead of second place finisher Mia Nicolosi (ISV624).

After receiving a Black Flag penalty in race two, Nicolosi took three straight bullets but could not find the consistency of Duff over the weekend. A reversal of fortunes from 2016, Duff was delighted to take the title as this will be his last Dinghy Championships racing in the Optimist class.

In third was Caroline Sibilly, from St Thomas Yacht Club and this also gave her the win in the blue fleet in which Nathan Haycraft took second and Winn Majette third, finishing sixth and seventh respectively.

Also racing for the BVI were Ryan Lettsome who finished in 20th place, Samuel Allen who finished 24th and  Antonio Cisneros. Competing in just his second regatta in the Championship fleet, Cisneros rounded out the weekend with an exceptional sixth place finish in the final race.

Twelve green fleet sailors had a fantastic weekend, completing a total of 16 races.  For some of these sailors it was their first ever regatta and they all did an outstanding job, returning to the beach with lots of smiles and asking for more racing!

Top BVI boat was Amanda Plaxton who claimed her first ever regatta race win and finished just three points behind Thill in fourth.  Next up for the BVI was Victoria Rowlette in sixth, Wil Seddon in seventh and De’Sani Thomas in eighth.

Racing for the first time were Aidan Catterall, Jayde Fanord and the youngest competitor in the event, Xavier Johnston. Six competitors raced in the Laser Radial fleet and it was an intense duel for first and second place throughout the weekend.  Daniel Smit from Antigua and Mateo di Blasi from St Thomas exchanged first and second place in every race but it was eventually Smit who prevailed and took the overall win by just one point.

Stephon Ganga finished in third overall to take the BVI title and he was followed by Alex Rambarose, Jerome Parkins and Noah George. White Fleet (age 10 and under)

The  2017 VIODA Triple Crown also wrapped up this weekend with the results added to those from the Crucian Open in February and the VIODA regatta in April.

Leading going into the weekend was Caroline Sibilly and she kept control of the leaderboard to take the title with 93 points from the three regattas.  In second place was Jose Arturo Diaz from Puerto Rico and third place was Katherine Majette from St Thomas.

With 31 races sailed, the scores from each race are added together and a discard applied after every six races so they don’t count their worst scores. 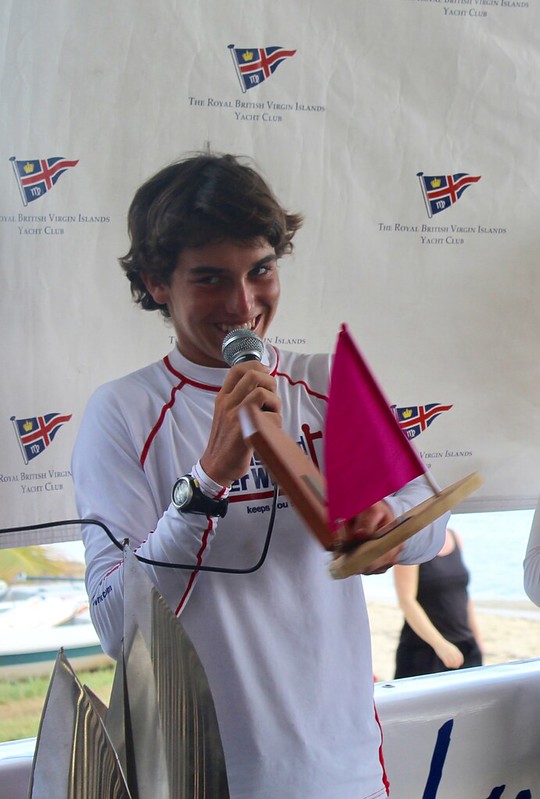